Follow the instructions at bitbucket and install all the necessary things. Then clone the repo:

Then you can follow the guideline below and learn about branching and feature deployment. All you need to care about as a feature developer is the dev branch and the feature branches. Don't worry too much about other branches. All you need to do is make a branch from the dev branch and call it feature-xxxx and then work on it and do whatever you want. Preferably don't remove stuff. Work and make commits and have fun. Also checkout this video that I made that shows how you can use git as a content switcher to look at different features. In summary:

If you and someone else work on same files at the same time, conflics will be caused. They are not a big deal because they can be resolved, but make new files with different names if you decided to make another branch from the dev to work on another feature.

Pushing and updatig the remote repo

Once you are ready to share your work with others in the team, push your branch to the remote repo:

Pulling and updating the local repo

If you want to update your local repo from the remote, go to any branch that you want and then pull down changes:

To see a list of all availabe branches, do:

Lets start a sample project and follow an example workflow!

Lets add a readme file and make the first commit.

Now we have the master branch and the first commit. Lets branch off to the dev branch from the master:

Now we are on the dev branch. Remember, nothing is commited directly into dev. Things are added to dev with merges. Now, lets start working on a feature. We call this feature "f1". For this purpose, lets make a branch from dev and work on our feature.

Now that the feature "f1" is done we are ready to merge into dev: 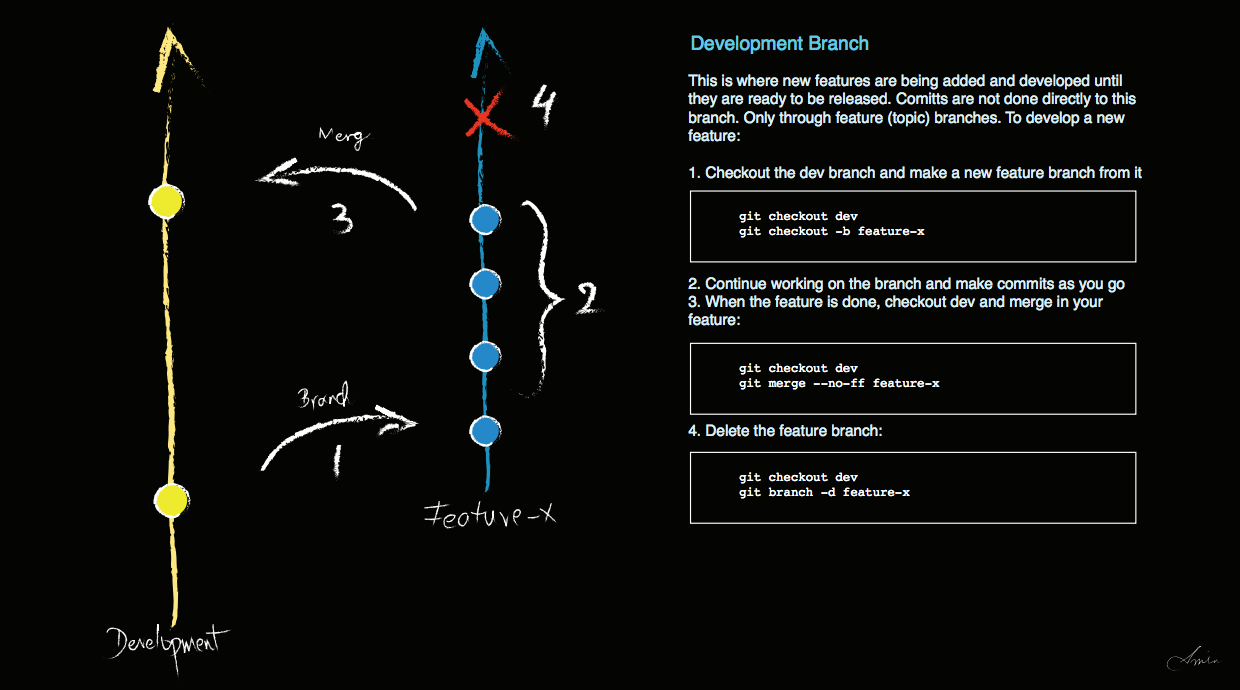 Good, we have our first feature implemented! We are ready to deploy. Now, we need to make a deploy-x branch from dev:

Now that deploy-f1 is ready, we should mege to master first and then to dev:

and then merge deploy-1 into dev:

now that the deploy-f1 branch is merged in both branches, it should be deleted: 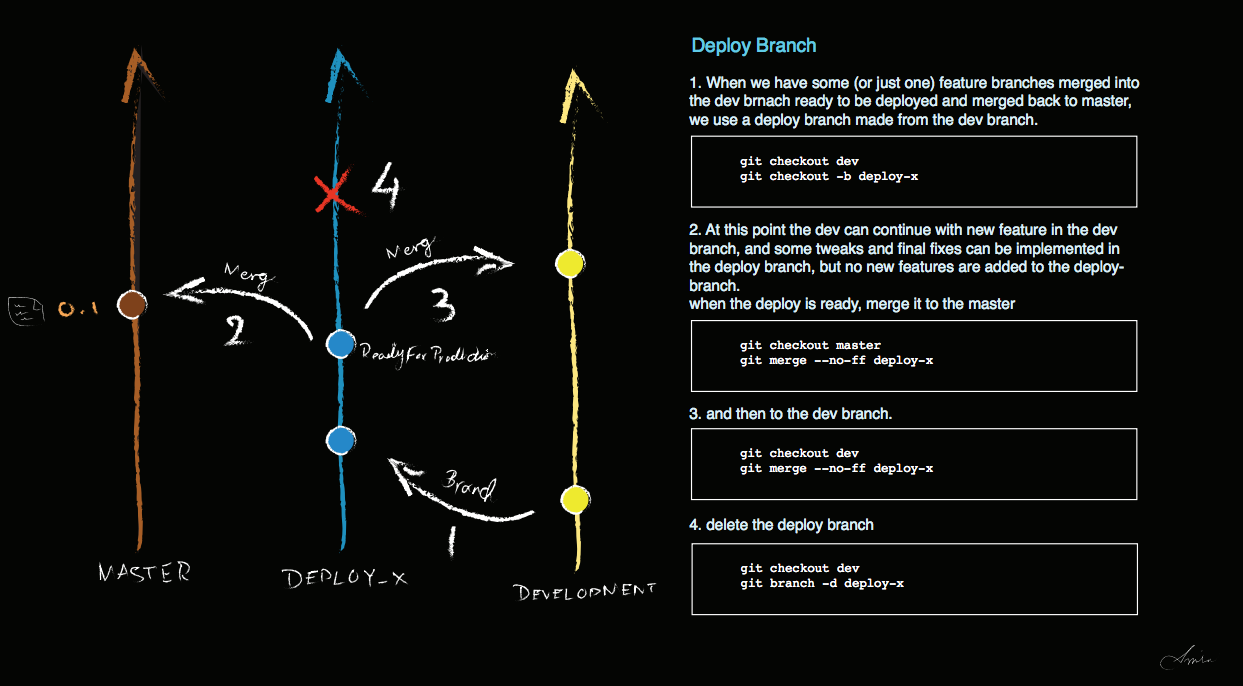 That's it! our feature is deployed and the commit is tagged on the master so we can find it later easily anytime later.

When there is an issue that needs be fixed on the production, a new branch from master created called fix-x. Then once the fix is done, it is merged into master and then merged into dev (the order is not important) and then we finally delete the fix branch.

So, let's say that there is a small bug on v.0.1 and has to be fixed right away:

Now, we can fix the issue and commit the fix:

Now, we merge into master:

then merge into dev so that the bug fix is added in the next deployment:

and finally delete the fix-f1 branch once the merge is successful:

There are main branches and sub branches that are used for developming the application.

The main branches are the master and the dev branch.

The master branch contains the production ready code. Nothing is directly committed to it directly. It gets populated through merges.

The Dev branch contains the main development code. Nothing is directly domitted to it directly. It gets populated through merges.

There are also sub branches that are used. There branches include:

Used to quickly fix something on the master branch. They branch off from the master branch. After the fix, they are then merged back into master and also to the development or deploy-x branch. And finally, the fix-x branch is deleted after the marges.

To pull the changes run the following. This is equivalent to svn up

To push, first add, then commit and the push:

To push all the branches and changes do:

Get the latest posts delivered right to your inbox

Even though it is not the best idea to use a lot of JavaScript in LESS, it come in handy when you need to define something more involved. The snippet below allows you

Stay up to date! Get all the latest & greatest posts delivered straight to your inbox